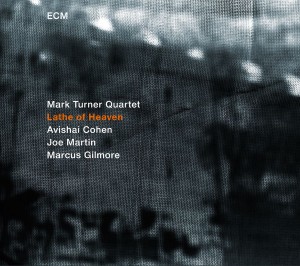 Mark Turner is one of the most admired saxophonists of his generation  , renowned for his exploratory intellect and intimate expressivity on the full range of the tenor horn. Lathe of Heaven is his sixth album as a leader, but the first under his own name since 2001. It’s also his debut as a leader for ECM, following two fine albums for the label in the cooperative trio Fly with Larry Grenadier and Jeff Ballard, plus appearances on key ECM recordings by Billy Hart and Enrico Rava. Turner leads a quartet of kindred spirits here, often entwining with rising star trumpeter Avishai Cohen as they play long, introspective lines of hypnotic grace; and with the lithe rhythm section of bassist Joe Martin and drummer Marcus Gilmore, there is subtle volatility in the air.